Hello, How Do You Do? Networking Power 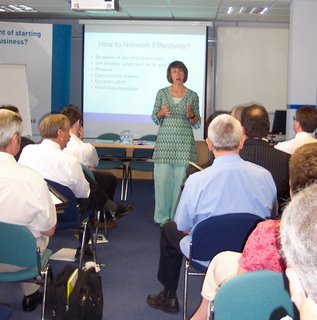 If this week had been a stick of rock it would have had networking running through it, I started the week networking at Inspirational Speakers and I closed the week by speaking this morning on the Power of The Network on behalf of Cambridgeshire Business Services. Thank you to Margaret Butterfield for her splendid organisation.

Networking is described as a key business tool in the world of today, its power and success cannot be under estimated, and yet to a lot of us the thought of going into a crowded room filled with people we don’t know and having to introduce ourselves fills us with dread.

Hopefully my session this morning enabled people to learn the art of networking – what it can do for you and most importantly how to be an effective networker to build your business. A lot of people think networking is about selling, I don’t believe it is, for me its about meeting new people and maybe developing mutually effective business relationships. Networking isn’t a quick fix it takes time, energy and effort.

Here are my top tips for networking effectively:-

Be aware of your first impression – think about what to wear, and pay attention to body language.

Identify what you want to achieve – none of us can afford 3 hours out of the working day where we are not being paid or being productive. Do you want to network for inspiration, to find a role model, for information, for support?

Beginning and endings – learn the art of small talk to open a conversation, build some rapport, the kiss of death is launching straight into business speak.

Know when to move on, 7 mins per person is optimum.

Follow up – make sure you keep in touch with those people who you clicked with, and who you felt there maybe some value in developing an ongoing relationship.

Jo Parfitt and Jacqui Tillyard are both what I would describe as Queen Networkers, they have written a book together called Grow Your Own Networks ISBN 0-9529453-7-1 The book uses gardening as a metaphor. Well worth a read.

For those of you who came along this morning, it was lovely to see you.

This site uses Akismet to reduce spam. Learn how your comment data is processed.

I’ve left my job, what should I put as my title on LinkedIn?

If you are on garden leave you technically don’t need to alter anything at all.  If it’s part of your exiting contract that you change this then that’s a different matter. A lot of people Read more…

I can’t believe how redundancy has hit me, I feel like someone has died.

The symptoms of bereavement don’t just apply to when someone has died they also apply to some of the many changes that occur through life, be this a divorce or job loss. Very often subconsciously Read more…

I feel unfulfilled in my job, but it’s not a good time for me to leave.

Waking up in the morning and feeling that dread that you have to go to work is a horrible feeling.   And there are times when it might not be the right time to look for Read more…